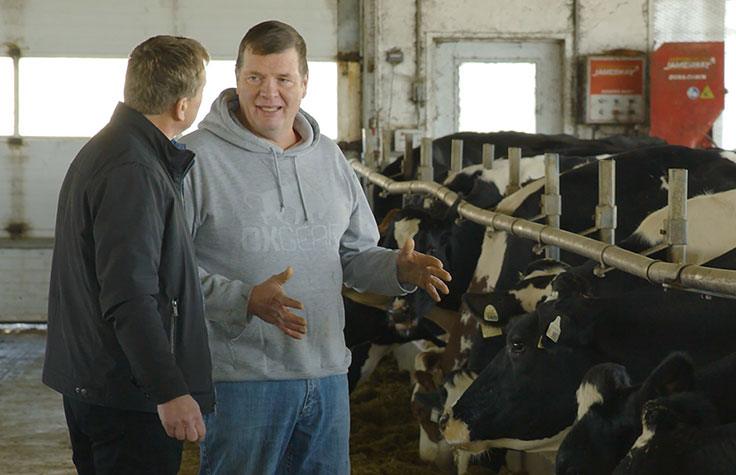 Canadian Dairy Network (CDN) is the genetic evaluation center for dairy cattle in Canada, providing genomic data management, analysis, and publication services for all dairy breeds in the country. CDN began operations in 1995 and has been managed by Brian Van Doormaal since day one. He recalls that nearly 15 years into his career, genomics hit the Canadian dairy industry “like a big explosion.” Since then, he has overseen a successful program of genomic data growth and utilization driven by an increasing percentage of dairy farms participating in herd genotyping.

Brian Anderson is a fifth-generation dairy farmer. The family business is on 600 acres in Ontario, with a herd of 300 animals. As head of breeding operations for Athlone Farms, he has direct experience using genetic selection to improve his herd. He is also a member of CDN’s Genetic Evaluation Board, a subcommittee that advises the organization on current genetic and genomic evaluation activities and helps dairy farmers make profitable use of genomic information.

“Dairying is a difficult business to be in,” Van Doormaal said. “Every farmer needs to find a little extra advantage to make their herd profitable.”

In 2019, CDN will celebrate 10 years of supporting genomic selection of dairy cattle in Canada. iCommunity spoke with Van Doormaal and Anderson to learn about CDN’s success, the continuing growth of the organization’s dairy cattle genomics database, and its value to Canadian dairy farmers.

Q: What is CDN’s role in the Canadian dairy industry?

Brian Van Doormaal (BVD): The Canadian dairy industry is composed of approximately one million milking cows and 450,000 heifers. It includes a total of nearly 11,000 herds, and approximately 75% of those herds participate in our breed improvement programs. Our role is to conduct genetic evaluations of individual animals, males and females, and manage the dairy animal genotype database.

The first animals were genotyped in 2008. Today, approximately 10% of newborn heifers are genotyped, and we now have data on 235,000 Canadian animals. We share a genotype database with the United States, so the volume of DNA data on dairy cattle at CDN is extensive. We now have more than three million genotypes in total, including dairy animals from several different countries.

Several years ago, we introduced Pro$, a national genetic selection index for dairy farmers looking to optimize farm profitability. Our goal is to help farmers maximize the productive lifetime of their cattle while also reducing costs.

Q: How is genomic testing performed in Canada?

BVD: Genomic testing is provided by CDN member industry partners, mainly Holstein Canada and through some artificial insemination (AI) centers. They work at the farm level to introduce the technology and encourage farmers to learn and understand how genomic testing can be of value.

To obtain DNA for testing, they will typically pull hair on heifer calves or use tissue samples. Those samples are sent to a laboratory, often in the United States, and the genotype data resulting from that process comes to CDN.

"Genomics is the next step in our mating strategy, because it increases the accuracy of the tools that we have been using."

Q: What are the genetic traits of importance to dairy farmers?

Brian Anderson (BA): We’re looking to improve functional traits with genomics, such as herd life, somatic cell count, and hoof health. The accuracy of genomics gives us a lot more confidence in breeding a better cow.

BVD: Feed conversion, or feed efficiency, is something we can select for with genomics that we would never have considered 10 years ago. Feed represents a significant portion of all costs on a dairy farm. If each animal has a higher feed conversion ratio, the farmer ends up with more profit.

Economics and regulations are changing the traits of importance to us. If we go back 50 years, the only trait of importance was high milk production. Now we’re looking at longevity, reproductive ability, disease resistance, and anything that affects costs associated with the regulatory requirements of dairy farming.

Q: How do dairy farmers use genomic information?

BA: When I started farming, we had a 4500 kg production average per lactation, and today we’re at about 10,500 kg. The cows have improved greatly in conformation, value, and lifetime productivity. The welfare of the cows is greatly improved by selection for traits such as hoof health and disease resistance. Better disease resistance reduces our costs and utilization of antibiotics. We have very efficient animals, but genomics helps us breed cows that give even more milk. Production might double again sometime in the future.

"A farmer doesn't need to wait 5—6 years for the bull to become progeny proven..."

Genomics is the next step in our mating strategy, because it increases the accuracy of the tools that we have been using. Before I got started in dairy, my father went to the AI center and bought the semen of the best bull. Forty years ago, we switched to corrective mating, where we tried to choose bulls with characteristics that complemented our herd. That strategy has evolved over the years, and with the accuracy of genomics we can now identify animals with genes that can help our herd.

Genomic testing is a great way of identifying and concentrating on our superior animals. We’re using genomics to identify animals on which we can use more expensive semen. The cost of genotyping is lower now. It’s a lot cheaper to do a genomic test than it is to raise an animal and find out two years from now that she really doesn’t measure up. We have a good cross-section of our older herd tested, and now we’re genomically testing our younger animals.

BVD: Genomic testing confirms the parentage and estimates the genetic potential of an animal. On many farms, there are too many calves born on a given day to identify the parents correctly, or multiple inseminations have occurred that don’t allow identification of the sire. Every animal genotyped in Canada ends up with an automatic parentage verification of its sire and dam. Farmers use that information to assign the actual value of that animal. With that information, they can better determine whether to sell, breed, or invest in it.

The cost of raising a heifer is extremely important, especially compared to the cost of genotyping a baby calf. In addition to helping farmers identify which animals to invest in, genomic testing also identifies heifers that are carriers of undesirable genes. You can avoid affecting the next generation by mating that animal with one that is not a carrier.

When a bull is born on a farm, an AI company can genotype that bull and have an excellent idea of what DNA it inherited from its parents. We can test full brothers that have the same parents and identify the individual animals that have a poor package of genes compared to the ones that inherited the right package of genes. A farmer doesn't need to wait 5−6 years for the bull to become “progeny proven” to use its semen extensively.

"Every farmer needs to find a little extra advantage to make their herd profitable."

Q: What is the importance of having a large genome database?

BVD: Canadian dairy farmers initially realized the power of genomics through the genotyping of bulls that had sired high-performing daughters. The bigger that reference population of progeny-proven sires is, the higher the gain in accuracy that results from genomics. Over the last decade, we’ve learned that additional accuracy can be gained by expanding the reference population to include cows. The more widespread the adoption of genomics, for both sires and cows, the greater the benefit for the whole industry.

Q: What are the remaining roadblocks to widespread adoption of dairy cow genomics?

BVD: All bulls available in AI are selected based on genomics. So, whether farmers know it or not, they are making breeding decisions that are a consequence of genomic selection. Over the past 10 years, we’ve proven that selection is possible for all traits. Understanding the benefit of genotyping females is a remaining roadblock.

On some farms, it’s standard operating procedure to genotype every heifer calf. Other farms are trying to identify a smaller percentage of heifers for testing to optimize the return from their genotyping investment. At CDN, we’re partnering with Holstein Canada to develop a software tool to help farmers make the best decisions on how to adopt genotyping technology.

BA: When I first learned about genomics, I felt that it was something that could be valuable. After two generations, it’s easy to see that the estimated breeding values (EBV) are much more accurate. Sometimes, it’s just a matter of seeing it for yourself.

"One of the greatest opportunities that we’ll have with genomic selection is separating the traditional relationships that exist between positive and negative traits."

Q: What is the future of dairy cattle genomics?

BVD: In previous decades, we recorded standard traits such as production, body conformation, and somatic cell count as a measure of mastitis resistance. After the arrival of genomic selection in Canada, we have continually invested in research. We can now demonstrate that there is potential benefit in genomic selection for traits we would never have considered before. Some of these traits deal with the animal itself — disease resistance, longevity, mobility, and lameness. However, there are other traits of importance that relate more to the dairy product that consumers buy, such as casein composition, lactose, fatty acid, and cholesterol content. We have shown that there is heritability associated with some of these product traits. There’s an opportunity to use genomic selection to focus on the nutraceutical properties of the dairy product.

One of the greatest opportunities that we’ll have with genomic selection is separating the traditional relationships that exist between positive and negative traits. For example, high-production animals traditionally have more difficulty on the fertility side. If we can identify those animals that carry genes for high production and the right genes for good fertility, we can introduce more of those animals into our populations.

BA: Looking into the future, we’re also going to be concerned with methane production and our carbon footprint on the farm. Genomics will help us identify animals that create less methane from feed. More efficient animals and higher milk production are traits we can look forward to in the future.

Learn more about how CDN is supporting genetic progress in Canadian dairy herds: